Hadoop has been a media darling for years. When a technology solution is touted as the “be all end all solution” to manage big-data, heads turn and eyes roll. I believe it is time where we appreciate hadoop for what it is and understand what it is not.

Hadoop is an Apache open source framework written in java that allows distributed processing of large data sets across clusters of computers using simple programming models. A Hadoop frame-worked application works in an environment that provides distributed storage and computation across clusters of computers. Hadoop is designed to scale up from single server to thousands of machines, each offering local computation and storage.

What do I mean when I say Hadoop?

Hadoop dwells in the world of terabytes if not petabytes of data. The data must come from somewhere. Most common source of data is the frontier databases, which keep the websites and apps alive. As table sizes grow, the queries slow down and you end up archiving this data. This data is valuable and can yield insights if we analyze it instead of archiving it. Sqoop is a member of the Hadoop Eco system which is designed to pull in data from relational databases pushes it into hadoop. It is highly configurable and will not burn down your precious oracle with connection requests.

Another common source is logs. Oh the tons and tons of logs. Push them right into hadoop. Multiple solutions exist in the Hadoop Eco system to capture logs from the army of enterprise apps and feed them to hadoop. Apache flume and Chukwa are great options to explore and stream logs into hadoop, where we can archive/analyze them.

So Basically “Hadoop is a software framework which supports data intensive processes and enables applications to work with Big Data. Hadoop is based on Mapper-reducer technology”

We can use following diagram to depict these four components available in Hadoop framework. 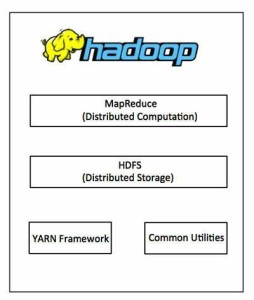 Since 2012, the term “Hadoop” often refers not just to the base modules mentioned above but also to the collection of additional software packages that can be installed on top of or alongside Hadoop, such as Apache Pig, Apache Hive, Apache HBase, Apache Spark etc.

Hadoop MapReduce is a software framework for easily writing applications which process big amounts of data in-parallel on large clusters (thousands of nodes) of commodity hardware in a reliable, fault-tolerant manner.

Typically both the input and the output are stored in a file-system. The framework takes care of scheduling tasks, monitoring them and re-executes the failed tasks.

The MapReduce framework consists of a single master JobTracker and one slave TaskTracker per cluster-node. The master is responsible for resource management, tracking resource consumption/availability and scheduling the jobs component tasks on the slaves, monitoring them and re-executing the failed tasks. The slaves TaskTracker execute the tasks as directed by the master and provide task-status information to the master periodically.

The JobTracker is a single point of failure for the Hadoop MapReduce service which means if JobTracker goes down, all running jobs are halted.

Hadoop can work directly with any mountable distributed file system such as Local FS, HFTP FS, S3 FS, and others, but the most common file system used by Hadoop is the Hadoop Distributed File System (HDFS).

The Hadoop Distributed File System (HDFS) is based on the Google File System (GFS) and provides a distributed file system that is designed to run on large clusters (thousands of computers) of small computer machines in a reliable, fault-tolerant manner.

HDFS uses a master/slave architecture where master consists of a singleNameNode that manages the file system metadata and one or more slaveDataNodes that store the actual data.

A file in an HDFS namespace is split into several blocks and those blocks are stored in a set of DataNodes. The NameNode determines the mapping of blocks to the DataNodes. The DataNodes takes care of read and write operation with the file system. They also take care of block creation, deletion and replication based on instruction given by NameNode.

HDFS provides a shell like any other file system and a list of commands are available to interact with the file system. These shell commands will be covered in a separate chapter along with appropriate examples.

How Does Hadoop Work?

A user/application can submit a job to the Hadoop (a hadoop job client) for required process by specifying the following items:

The Hadoop job client then submits the job (jar/executable etc) and configuration to the JobTracker which then assumes the responsibility of distributing the software/configuration to the slaves, scheduling tasks and monitoring them, providing status and diagnostic information to the job-client.

The TaskTrackers on different nodes execute the task as per MapReduce implementation and output of the reduce function is stored into the output files on the file system.