In order to achieve reliability with commodity hardware, one has to resort to a replication scheme, where multiple redundant copies of data are stored. In normal operations, the cluster needs to write and replicate incoming data as quickly as possible, provide consistent reads and ensure metadata and services information are also redundantly maintained. When crashes occur, the customer is exposed to data loss until the replica is recovered and re-synchronized.

Production success with Hadoop requires a platform that not only stores data as system of record and ensures applications run 24×7, but also a platform that allows for easy integration with the rest of the enterprise data architecture and tools. MapR is the only distribution to provide these capabilities out-of-the-box and its architecture is key to how it achieves it.

Building a highly reliable, high performance cluster using commodity servers takes massive engineering effort. Data as well as the services running on the cluster must be made highly available and fully protected from node failures without affecting the overall performance of the cluster. Achieving such speed and reliability on commodity servers is even more challenging because of lack of non-volatile RAM or any specialized connectivity between nodes to deploy redundant data paths or RAID configurations.

This section describes the the various components of Hadoop: parts of the MapReduce job process, the handling of the data, and the architecture of the file system. As the book Hadoop In Action by Chuck Lam [page 22] says “Hadoop employs a master/slave architecture for both distributed storage and distributed computation”. In the distributed storage, the NameNode is the master and the DataNodes are the slaves. In the distributed computation, the Jobtracker is the master and the Tasktrackers are the slaves which are explained in the following sections.

MapReduce Job Processing: An entire Hadoop execution of a client request is called a job. Users can submit job requests to the Hadoop framework, and the framework processes the jobs. Before the framework can process a job, the user must specify the following:

Hadoop has four entities involved in the processing of a job:

The following figure from Pro Hadoop by Jason Venner [page 28] shows the different tasks of a MapReduce job.

Given below is the architecture of a Hadoop File System. 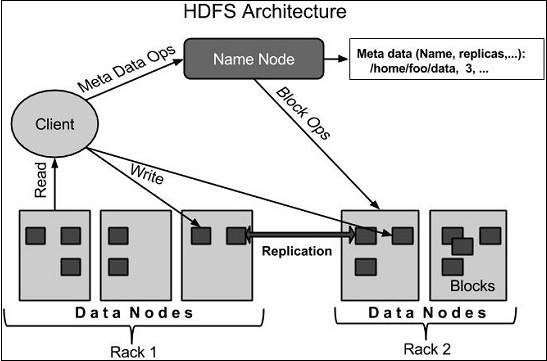 HDFS follows the master-slave architecture and it has the following elements.

Datanode: The datanode is a commodity hardware having the GNU/Linux operating system and datanode software. For every node (Commodity hardware/System) in a cluster, there will be a datanode. These nodes manage the data storage of their system.

Block: Generally the user data is stored in the files of HDFS. The file in a file system will be divided into one or more segments and/or stored in individual data nodes. These file segments are called as blocks. In other words, the minimum amount of data that HDFS can read or write is called a Block. The default block size is 64MB, but it can be increased as per the need to change in HDFS configuration.